How much movement do you actually use?

Registered User
Now that I've shot a decent number of images on my Nagaoka, I've come to realise that the amount of movements that I actually need to use for landscapes, is much less than I originally thought!

Surprisingly, rise and fall have been my most used movements, and probably the biggest movements too. I've had a couple of times where I've used rise and fall close to their maximums, but tilt has only ever been a couple of degrees at the most. I'm very surprised looking through my notebook at how many photos I've taken that had no movements whatsoever.

So, I'm curious if this is similar for most LF users, or if anyone actually finds themselves using a lot of extreme movements on a regular basis?

Registered User
The only movements I use for landscape are tilt front/rear with the very odd use of swing and only a degree or 2 at that. Can't remember the last time I used rise, fall and left/right shifting, definitely a few years ago.

So no extreme movements here


Sent from my iPhone using Tapatalk

Registered User
You have generally be shooting something very close up or with a long lens to need more than a couple of degrees of tilt to bring everything into focus for landscapes etc.
A

Registered User
After nearly 40 years of LF landscape photography, if I use any movements at all its forward front tilt, rearward back tilt, front rise/fall; and, slight movements at that. It's after all these years of not using (or needing) extreme camera adjustments that I've really grown quite fond of using my Crown Graphic. That thing is a brick when closed and I pack it anywhere!
S

"Landscape" is a word that describes various scenes, depending on location. The movements required are determined by one's particular landscape. In the American West, what's before a lens might be configured more like the things Carl photographs in Somerset than what Glenn encounters in Newbury.

Registered User
I'm always using front rise/fall, although as the lens starts at the bottom and I move it up to roughly the centre, it's just possible that I always have it exactly centred for the final framing, although I doubt it. I've rarely used front tilt, and not very much, for landscape. And that's it.

Turn to architecture, and I've probably needed them all at some time ot other, even if not very extreme.

It's going to depend on your subjects.
G

Registered User
If you step back from the camera and imagine where the subject, lens, and film planes fall, it is usually clear just how little movements are needed a lot of the time, especially with normal focal lengths. I think the most swing I ever used was when I first got my 5x4 and tested it out on a bookshelf viewing from the side.

I remember photographing a dockside gantry with a fence at my back, and squeezing every bit of rise I could get out of my Wista and 90mm. The combination was bellows limited. http://grahamp.dotinthelandscape.org/images/mareisland/gantry.jpg

Registered User
Since I am not really a landscape photographer, I am probably the "oddball" here . I use tilt and swing quite extensively with various degrees depending on the atmosphere and dream-like quality I want to create. I use rise and fall basically only to adjust the framing after I have applied my tilt/swing or in rather architectural shots (at least my version of architecture ).
But for the rare occasion where I photograph a "straight" landscape image I agree with you, far less movement is necessary than I expected.
K

Registered User
Funnily enough, that after so many years of experience with large format, it is something that I have never really thought about... I just make the required 'adjustments' by that which I observe on the ground glass. Being now 'old an grey' much of my 'mathematical' reasoning has diminished due to a diminishing of the amount of required mathematical mental 'exercises' (other than balancing the bank book) it may have been somewhat replaced by more immediate reasoning/ problem solving.

Might it be, that with any and all lenses, the closer you are (i.e. a higher 'magnification' at the film plane) requires greater movements due to the diminishing loss of DOF at any given f-stop?

KenS said:
Might it be, that with any and all lenses, the closer you are (i.e. a higher 'magnification' at the film plane) requires greater movements due to the diminishing loss of DOF at any given f-stop?

Therefore, as you get closer movements at the rear will be made in a region where you need a large amount of movement to affect the focus, although the effect on subject shape will be the same.

Front movements will be unaffected by this.
B

For an in depth explanation of what and why to use shift and tilt look here
https://en.wikipedia.org/wiki/Scheimpflug_principle
I always started with the thought that I would move the front - lens - to alter focus and the rear to alter perspective.
One consideration is the coverage of any lens, that is the size of the image circle the lens is capturing. Sometimes this circle is not much bigger than the 5 x 4 film field so movements may be minimal before running into fringing.
David
T

Registered User
If I'm close to the ground (or subject) I can use up to 10-15 degrees of tilt and often use a lot of shift to try and play with perspective.
I

Tim Parkin said:
If I'm close to the ground (or subject) I can use up to 10-15 degrees of tilt and often use a lot of shift to try and play with perspective.
Click to expand...

When close to the ground, do you tilt the rear standard much to exagerate the shape and size of the foreground objects

Registered User
I'd been using LF for work in the 1970's and 80's and was using my Mamiy645's for personal work mid 1980's and was constantly running out of DOF as I had no movements, I thought of upgrading to an RB67 but a 5x4 field camera just made far more sense,

I use some movements in about 40-50% of my images a touch less when shooting hand held, probably around the 10-15º of tilt Tim mentions with a 150-210mm lens, more ike 5010º with a 75-90mm lens. In my case it doesn't exaggertate the shape and soze of foreground objects. That's more to do with deliberate composition and choice of lens rather than the use of tilt -front or rear.

Ian-Barber said:
When close to the ground, do you tilt the rear standard much to exagerate the shape and size of the foreground objects
Click to expand...

That's exactly what I do - I like a bit of loomage!
M

As the others have said, i mostly use front/rear standard tilt and a bit of rise/fall now and then.

Registered User
I have found (from 'early' practical experience) that swings and/or tilts on either the lens... or the film standard are often made by those 'new to large format' with some disregard for the depth of focus at the film plane when focussing with the lens 'wide open'

Ken
(Been there, done that, bought the T-shirt and then 'wore it out')
I

KenS said:
depth of focus at the film plane when focussing with the lens 'wide open'
Click to expand...

I have tried this on numerous occasions but the fall off looked weird. Ken, do you have any examples where this has been applied

Registered User
Ken, the problem is that 135mm and longer lenses on a 5x4 camera have relatively shallow depth of focus so very often relying on just stopping a lens down just isn't enough. I said eralier I use tilt and rise/fall on 40-50% of my images, it may be higher than that I don't make notes.

I used a Crown graphic for over a year while living in Turkey and found that had insufficient movements, I chanced on a Super Grahic at a bargain price and now use that instead, the extra movements it has are sufficient for my needs, My Wista 45DX has far more movements than I've ever needed as do my MPP Micro Technicals MkIII & VII

I disagree totally from long experience in the commercial/technical applied side of photography, 30+ years of LF lanscape work and a decade working alongside two leading commercial/advertising photographers who primarily shot LF. Front or rear tilt and rise/fall to optimise placement in the image circle are a fundamental requisite of any LF camera. Every British wood & brass field camera I own even my 12"x102 have this basic feature.

As I stated earlier I even use front tilt when shooting hand held, that's how critical it can be unless as Ian says "I have tried this on numerous occasions but the fall off looked weird." Of course it depends what you are shooting I need critical sharpness in most of my images.

Here's two examples, it's really about knowing your lenses. 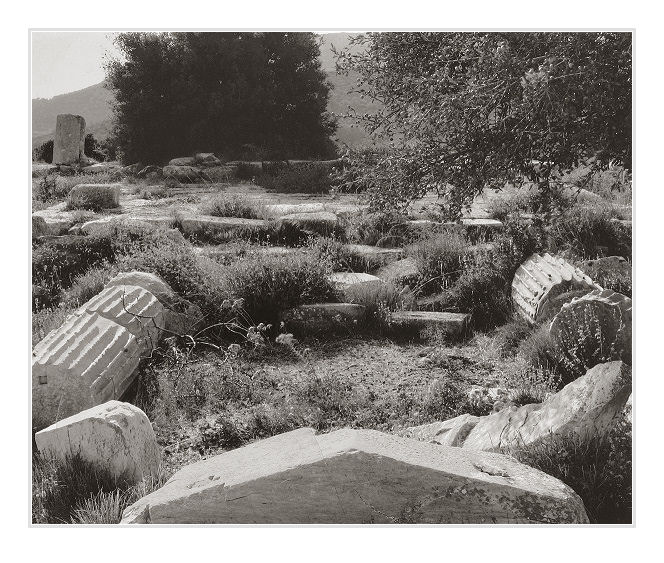 It's about knowing the capabilities of your lenses and the strengths and weaknesses of the cameras.

Staff member
Registered User
Ian, in your first example, Athenas Temple Notion was quite a bit of tilt needed because of the vertical elements (trees) which appear much taller than the elements on the ground
You must log in or register to reply here.
Share:
Reddit Pinterest Tumblr WhatsApp Link
Top