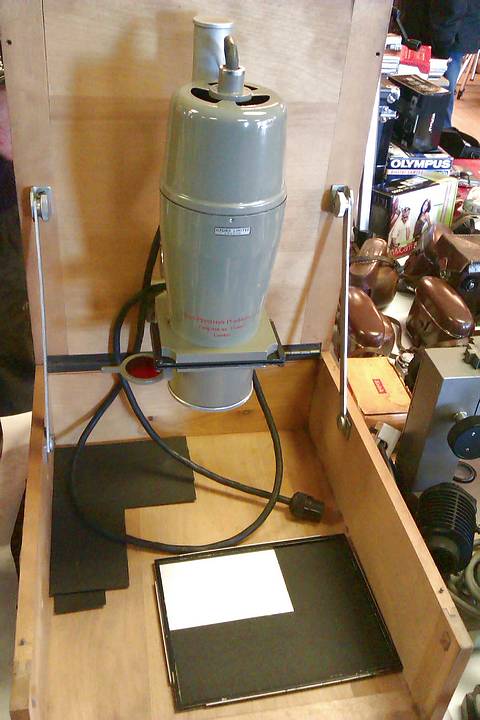 Registered User
I never used such a enlarger but what do you expect from this one?

martin-f5 said:
I never used such a enlarger but what do you expect from this one?
Click to expand...

I have borrowed one of these from a friend and I have been trying to use it to do contact prints from 4x5 paper negatives but I just seem to be struggling with exposure times and sharpness.

Registered User
Contact prints shouldn't be a problem, sharpness depends not on the enlarger or lens.
If the negativ lays direct on paper you should get a perfect result.
Make a sandwich photo paper-film-glas to be sure all is flat.
Exposuvretime will depend on lamp, distance from lens to board and f-stop and of course your paper.
Don't expect to much from a 5x4 contact print. I think it's too small for checking details.

Registered User
I've never seen one of the Ilford MPP enlargers except in BJP Almanacs. They weren't the only 35mm enlargers to come in a box, although they have a nice functionality in the way the case opens, but limited enlargement. I have a very early Gnome enlarger from the same period in a box/case which I made 20x16" prints with many years ago.

If you go to your local glass supplier they should be able to sell you some 1/4" (approx) glass, they usually have offcuts. It's great for contact printing if you don't have a contact frame because it's heavier than the usual 2mm glass. You would need to use some wet & dry to remove sharp edges/corners.

Martin is right that you shouldn't expect much with 5x4 contact prints, have you tried Harman Direct Positive paper ?

I plan to reversal process paper to shoot with my 12x10" camera this spring, Ilford don't sell Direct Positive paper in UK (or European) sizes other than 5x4 and 10x8, so know HAlf plate, whole plate, 12x10, 15x12 etc. It's an extra couple of steps for reversal processing but not difficult.

Ian Grant said:
Martin is right that you shouldn't expect much with 5x4 contact prints, have you tried Harman Direct Positive paper ?
Click to expand...

I have been following Joe Van Cleave's Youtube segments on this paper which does look interesting but as far as I am aware, the paper is no longer been produced.

Registered User
Martin is right. If the neg and the paper are held firmly emulsion-to-emulsion all over, there should be no loss of sharpness. Any controllable light-source will do the job. Establish printing times by making test strips in the usual way. Simple dodging and burning are possible, but tricky. I cannot advise on split-grade printing, but I presume it could be done.
I hesitate to suggest that the problem lies in the negative, but it's a possibility.
An interesting piece of kit. Never seen one before.

Registered User
Harman/Ilford shipped a lot of Direct Positive paper to the US quite recently.

When Ilford Imaging in Switzerland closed there were issues they made the emulsion which was originally a component for Ilfochrome (Cibachrome) and designed for coating on the Mellinex base.

The first production runs of Harman Direct Positive paper on Fibre and RC bases using the Swiss made emulsion were OK, the second run on RC paper failed and the entire coating had to be scraped and no DP RC paper has been made since.

Harman now make the emulsion themselves after negotiating the rights with the liquidators on Switzerland, this lead to a break in supply and a build up in demand. So it seems to sell out rather quickly - but it is available and in production. Hopefully Ilford/Harman may now be able to sort out the RC base coating issue.

Registered User
The enlarger looks like it uses a condenser light source. That would, perhaps, not be the best type of light to use for contact prints. An old fashioned light bulb on its own works well. I take the bulb holder out of my Durst M601 enlarger, replace the opal bulb with a clear one, then hang it from the enlarger casing. The timer remains connected to allow measured exposure times. Diffuser type enlargers are probably better for contacts if you are placing the frame on the baseboard and exposing via the lens.
Alex.

Registered User
I had a version of this - an MPP product, in fact, in battleship grey - which would take up to a 6x9 neg. It was crude, with a helical focus on the big drum at the bottom in which the appropriate 2" or 4" enl lens fitted (standard 39mm screw). Light source was a 150w bulb and double condensers. Mine was sans box, but I think they were originally intended for military snappers. Some press ones used them complete with a fold-up darkroom - god knows why! Unless one had access to a wire machine, in the good old days, it was as quick to hand your roll of film in plain brown envelope to a bus clippie who'd drop it off in the parcel office at the bus terminal or hand it over to a waiting hack and get his half-a-crown. We also used to use train guards for longer drops, or gull a passenger into taking said envelope ((brown) for the use of)) to hand over to another waiting hack with punter's name on board at destination station. The MPP used to get horribly hot in my cubbyhole under the stairs and smell like rotten eggs, but results were good enough for the Express, Telegraph and so on. As the Ian's have said, what matters is (a) ensuring neg holder is true, (b) good solid baseboard, and (c) above all a good enlarger lens. Mine came with a 2" Wray, which were fitted to Gnomes (made in Cardiff) and were crap. I think the problem was that on cheap lenses, heat damaged the cement between the elements. I had a 90mm Ross Resolux for both 120 and 35mm - 6x6 was max neg size. It was a good lens, generally stopped down to f8. You always have to bear in mind depth of field, and we ALWAYS focused on a sheet of doubleweight paper. Thirty years later, when I has the space to set up my own darkroom with a Durst AC707, Philips PCS 130/150 and an weirdo cold cathode heap for 5x4 which I bought new from Rob White in Bournemouth, I had a Minolta 5cm inititally, which was poor, changing to an El-Nikkor at 50mm and Schneider Componon-S 90mm with Rodenstocks for 105mm and 150mm on the beast (it looked like an agricultural version of a ZoneVI) - the latter lenses were superb, but I've either lost them or flogged them on . . . oh, the mistakes we made when we were conned into digital photography . . .
You must log in or register to reply here.
Share:
Reddit Pinterest Tumblr WhatsApp Link
Top